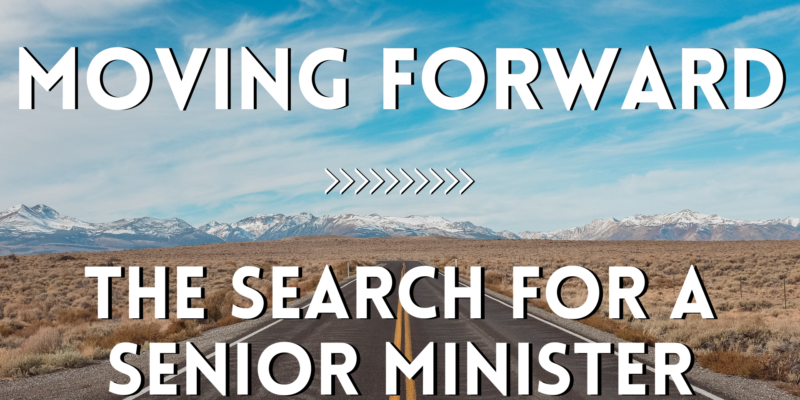 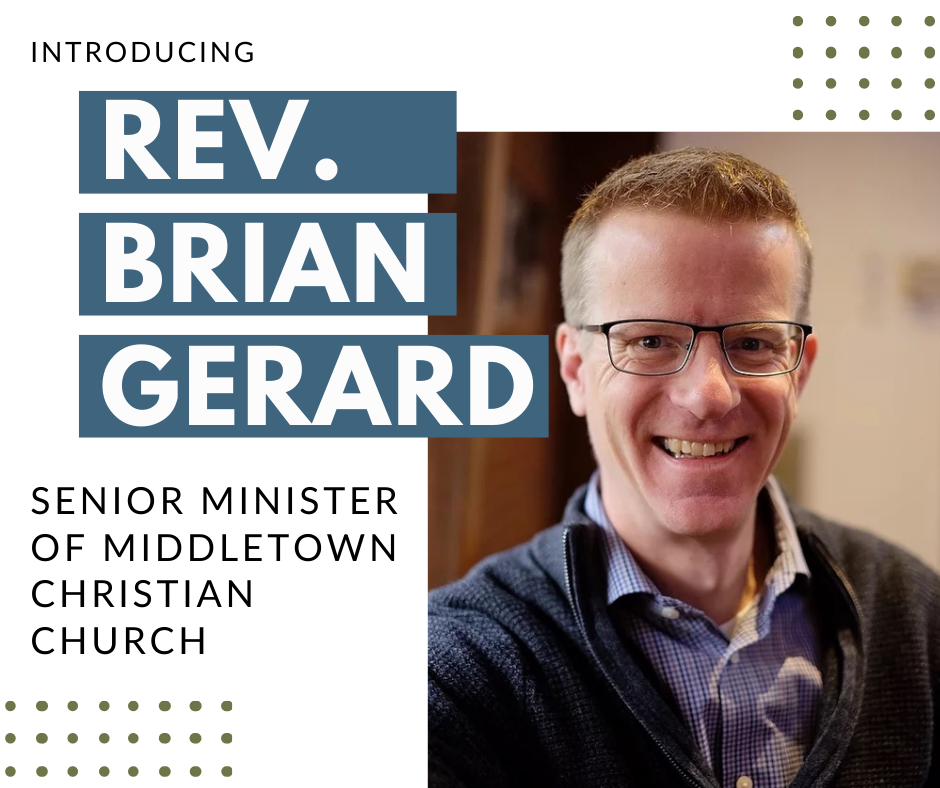 Brian has more than twenty-one years of experience serving as a senior minister for two different churches. He is a graduate of Phillips University and Yale Divinity School. While at Yale, he received the Calkins Prize for excellence in clear and vigorous pulpit speaking. He also received the Hallam Tweedy prize for exceptional promise in pastoral leadership. He has four Clinical Pastoral Education credits in pastoral care and is a certified supervisor of the Stephen Ministry Program.

Brian comes to us from First Christian Church of Louisville. He is a dynamic preacher who connects the Bible to everyday life. He is committed to the Christian Church (Disciples of Christ) mission of creating wholeness in a fragmented world and serving all of God’s people, no exceptions.

Brian will begin at Middletown on February 15, 2021. Until then, Doug Lofton will remain the Interim Senior Minister in a part-time capacity.

Thank you to the Senior Minister Search Team for their prayerful, thorough, and tireless search over the last nine months.

UPDATE DECEMBER 6, 2020: The search committee recommended a candidate for the position of Senior Minister to the Board of Directors. The Board unanimously approved the candidate, completing step 8 of the chart below. The next step is a special congregational meeting to vote on the recommended candidate, whose name will remain confidential until the meeting. Please check your email for information on how to register for the congregational meeting.

UPDATE NOVEMBER 18, 2020: The search committee continues to interview candidates for the position of senior minister. They have now moved into step 7 on the chart below.

UPDATE OCTOBER 26, 2020: The search committee is currently in their second round of candidate interviews. They have been meeting twice a week for several hours since late September. Using the chart below, they are in-between steps 6 and 7.

Susan was raised in the Disciple of Christ church.  She was born in Lexington and attended the Broadway Christian Church. She and her husband moved to Louisville, and joined Middletown Christian, where they raised their children Ashely and John. They’ve been members for approximately thirty-five years. Susan has been a Realtor for twenty-four years and currently works as an independent Agent with Remax Associates.

Susan has been involved in various ministries over the years, including youth, children’s, adult, music and more. She has also served as Deacon and Elder Chair. Susan loves that this congregation embraces and invites all people, from every walk of life, to come and worship with us.

Jessica Miller Kelley grew up at Middletown Christian Church, from around age 3 through high school graduation – Melody Makers through Revelations Choir, in terms of MCC’s wonderful music ministries! She left Louisville in 1999 for college at Furman University, where she majored in religion, and then moved to Nashville to pursue a Master of Theological Studies at Vanderbilt Divinity School. There, she met her husband, Matt, a United Methodist pastor, and became a book editor at Abingdon Press (the United Methodist Publishing House). Jessica and Matt have three children – Kate (11), Claire (8), and Jonah (4), all baptized in the United Methodist Church.

In 2018, Matt stepped away from congregational ministry and they moved to Louisville, where Jessica is now Senior Acquisitions Editor at Westminster John Knox Press (Presbyterian Publishing Corp.). They soon became active at Middletown and Jessica is thrilled to be back at her beloved home church and living in her hometown.

Paige Leaver has been a member of MCC for about a year and a half with her wife, Katie. Paige was born and raised in Ashland, KY, where her faith journey began in a United Methodist church. After going to school in WV and Lexington, KY, Paige landed in Louisville where she now practices as a Physical Therapist. At MCC, Paige is involved in the close-knit young adult group, volunteers on youth trips, leads the recreation committee, and serves the community through volunteer opportunities.

Whether it be through her job or through an unexpected meeting, Paige is passionate about helping each person that she interacts with become the best version of themselves. Paige loves to travel, spend time with her family, play with her animals (two dogs and a cat), play soccer, and make people laugh. The thing that Paige appreciates the most about MCC is the freedom to question and grow your faith without feeling guilty or singled out. MCC is everything that Paige and Katie were looking for in a church.

Judy Mallory grew up in northern Kentucky and became a Louisville resident after college. She is married to Jim. They have a daughter, Keri, and a grandson, Reis. Judy was a music teacher for three years, before returning to school and becoming a Licensed Professional Counselor. Judy’s work career was mainly with the Oldham County Schools where she was a school psychologist and Director of Special Education. She also worked for the Kentucky Department of Education as the State Director of Special Education.

Judy has been a member of MCC for more than twenty-five years and has been in choir all those years. Judy is a deacon, is involved in choir, Chalice Chorale, Sunday School, Bible Study group, cooking team, helps the decorating team when needed, volunteers in the office, was on the team that assisted in the creation of the children’s wing, and was on the Preschool Board for several years. Being a member of a Disciples of Christ Christian Church and Middletown specifically is the best church experience of her life because she is constantly challenged to think and fully supports the mission of living out the love of Christ and accepting people where they are.

Neil Sandefur is the proud father of Kyla, Briana, and Garrett and has been married to his wife, Sara, since May 2002.  Neil was raised on his family farm in western Kentucky and was baptized as a youth at Beech Grove Christian Church (DOC).  He moved to Louisville to attend Bellarmine College where he met Sara and graduated with honors with a BS in Actuarial Science.  He later completed his MBA at the University of Louisville.  Neil has grown his career in professional services focused on HR Technology solutions and is currently a Customer Success Director at Salary.com.

With Sara’s Christian foundation rooted in the Catholic Church, the couple attended a wide variety of Christian services looking for a church home. Middletown Christian Church was the first place where they both felt an immediate connection, a welcome with open arms, and a safe place to share differences and find common ground to grow in faith together. Neil and his family have been active in a variety of ministries at MCC and are excited to be included in what God is doing through the ministries of their church home.

John Kent Williams became a member of Middletown Christian Church  in 1964.  He graduated from Eastern High School, Morehead State University with a B.A. degree, Lexington Theological Seminary with a Master of Divinity Degree, and University of Kentucky Medical Center with Clinical Pastoral Education (CPE). In 1975, MCC ordained him into Christian Ministry, and he joined the staff of MCC as Minister of Leadership Development. He went on to work for the Christian Church Homes of KY and Village East, Inc. He retired in 2018.

In 1969 John married his high school sweetheart, Taffy Tapp, at MCC, and in 2019 they celebrated 50 years of marriage. They served in the Buddy Break program, and Taffy is a Stephen Minister. John is an Elder and substitute teacher in the Pathfinders class. John and Taffy raised three daughters who married and gave them six grandchildren.

Karen has been a member of the congregation for more than thirty years. She and her husband Bill currently attend one of the contemporary services. The Wilsons raised four children in the church and have actively served the congregation through children and youth programs, Stephen Ministry, local and international mission trips, communion preparation and grounds maintenance. Karen has worked in the Human Resource field for thirty-six years. She currently works for GE Appliances as the Health and Disability Leave Leader and benefits leader for Dental and Mental Health products.

Karen loves MCC because it calls its congregants to action in the world, close or far. MCC creates a safe space where people can heal and grow lifted up by the love and grace of Jesus Christ.